Bowsette, or Koopa-hime (Japanese: クッパ姫, translit. Kuppa-hime, lit. 'Princess Koopa'), is female version of Bowser in anime "Royal Hello yoshi" and the main antagonist in this series. The character was created on September 19, 2018 by an artist named Ayyk92 as part of a comic strip which he posted online. Bowsette quickly rose in popularity internationally, with related hashtags in English and Japanese trending on Twitter. Typically portrayed as a light-skinned blonde woman with horns, fangs, and a spiked collar with matching armbands, several professional Japanese artists contributed their own renditions of the character. A convention themed around Bowsette was planned for October of the same year. 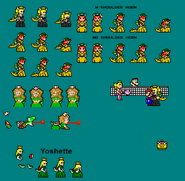 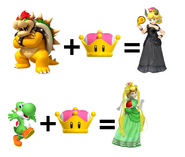 Prove of Bowsette and Yoshette 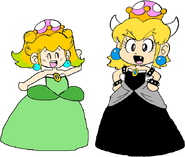 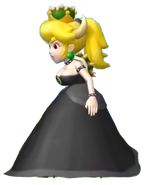