Just like Bowsette, Booette is a fan-made form of King Boo (or regular Boos) which was created uploaded onto the internet. On September 13th, 2018 Nintendo created their new trailer for the video game New Super Mario Bros. U Deluxe. In the trailer, a new power is seen for Toadette named the Super Crown. When Toadette uses this power, makes Toadette transform into Princess Peach, also, she's the antagonist in Hello yoshi royalty.

She is possible a ghost human look like Booette is also cute. 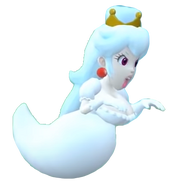